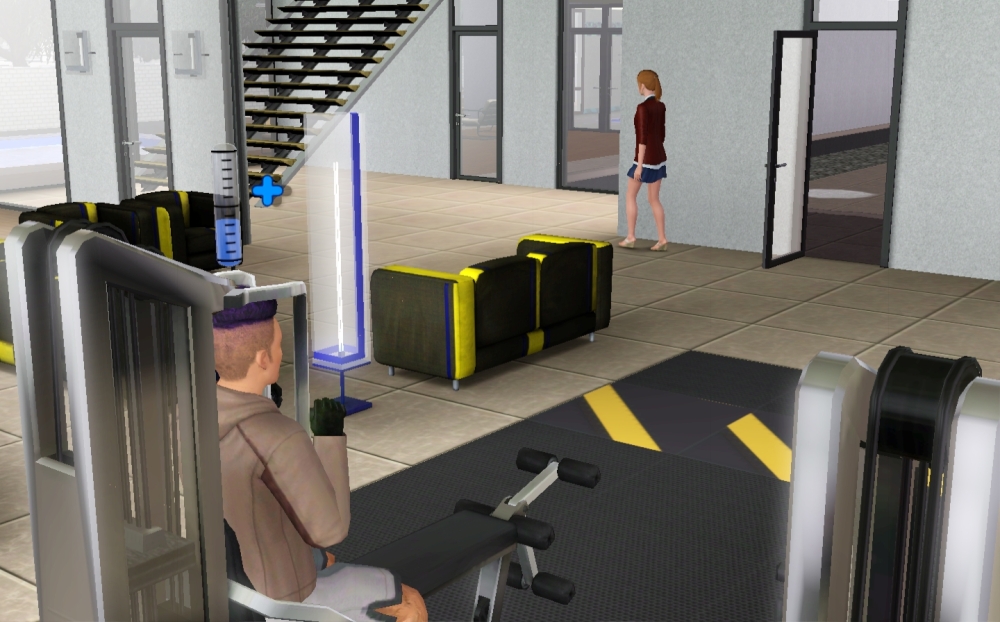 Pip is used to the gym being dead aside from a handful of fitness freaks like himself. Imagine his surprise, then, when his new girlfriend stops by along with most of her family.

It seems Piper’s stepmother just gave birth, and they’re here on some kind of bonding/babysitting trip.

Pansy: “Great, don’t move – if I hurry I can probably get a rocket from the base to fire him into the sun.”

Piper: “If I hold…very, very still…he might not start crying again…”

Eventually Pansy gives in and takes the kid home, leaving a relieved Piper to work out across the room from Pip. By mutual agreement, they don’t acknowledge each other. Too busy for romance right now!

Pip isn’t the only one with a full day of work. Marina has been tirelessly digging her way across the neighborhood, collecting a metric ton of empty chip bags and a hefty number of gems. After Pip has them cut, they net us a comfortable 3,000 simoleons, bringing the family funds to over $5,000! 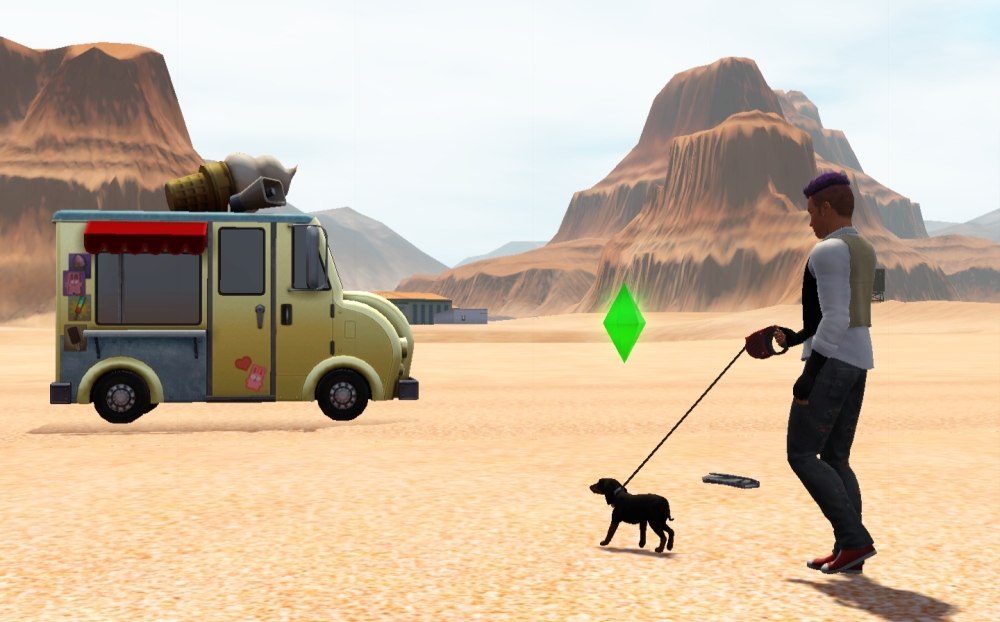 I’m ridiculously pleased with her, and so I’ve actually been indulging some of Marina’s wishes to go for walks. Good pooches get walkies!

It’s really more because I’m hoarding her lifetime happiness points so I can buy the Alpha Pet perk and get better hunting, but shhh. 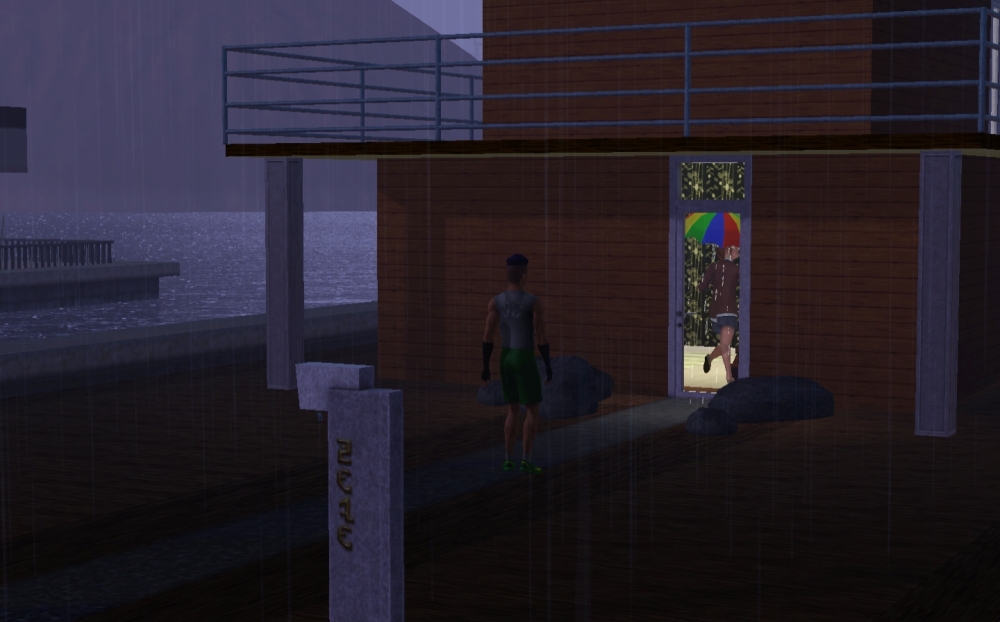 After the influx of money, Pip is ready to have someone else join him on his empty lot of misery and sunburn. StoryProgression informed me that Piper had recently moved out of her dad’s place after a screaming fight, so she might as well stop living in this pseudo-boathouse. 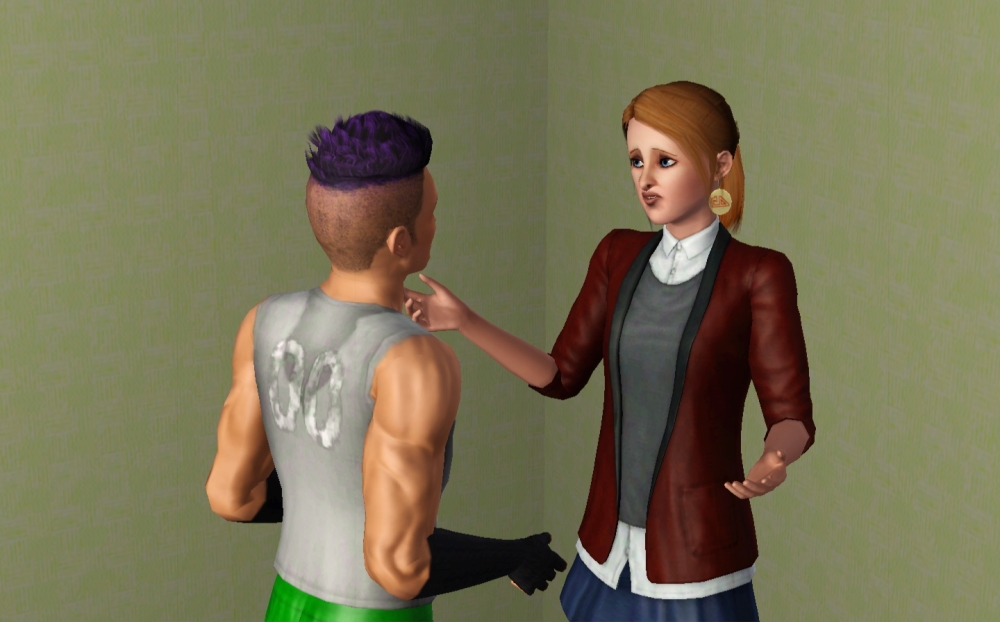 I’m not sure exactly what emotion that expression is meant to convey, but she accepts Pip’s invitation to move in, which is all I care about!

A second person in the household who doesn’t have the Loves the Outdoors trait means we really need to be thinking about a housing situation, and since we just had a boost to our finances…

Behold! The Cube of Shame! The game plan is to live in this shack until the Aces have a decent amount stored up, and then build a proper house next to it. This will probably be repurposed as a garage/workshed down the line.

You might notice that there’s a sleek car parked out front – Piper came with that in her inventory. It’s a VFN Kompensator, a luxury sedan worth a whopping $36,000. This car is worth more than everything else Pip owns combined.

I can only imagine Piper must have stolen her dad’s car when she moved out? Selling it feels sort of cheat-y, so we’ll be keeping it. It’ll drive up our bills, but they’ve got enough cash on hand to handle that. 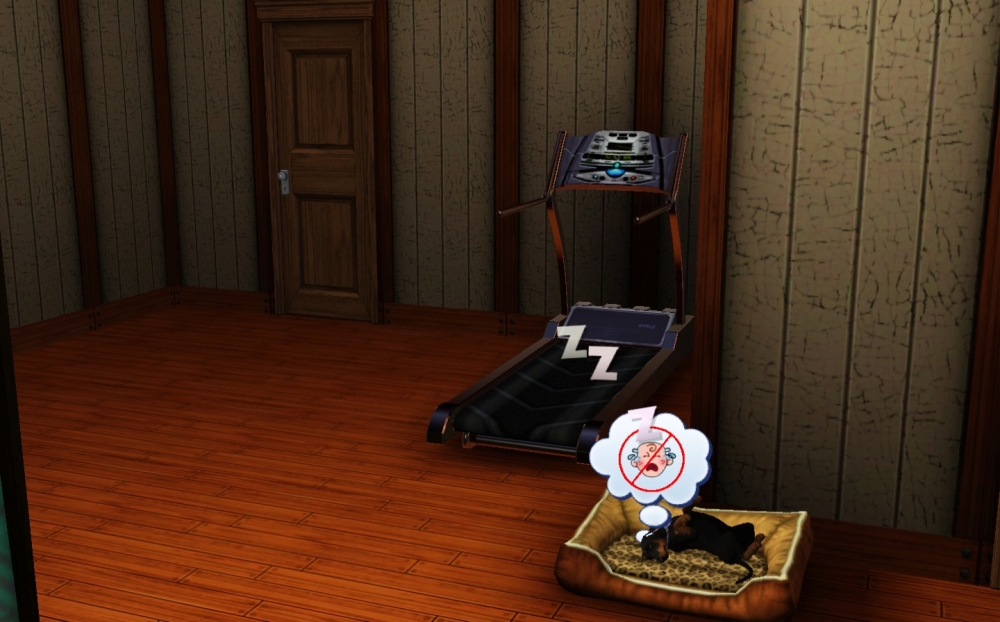 Inside the Cube, we have a cheap treadmill and dog bed set up by the entrance. 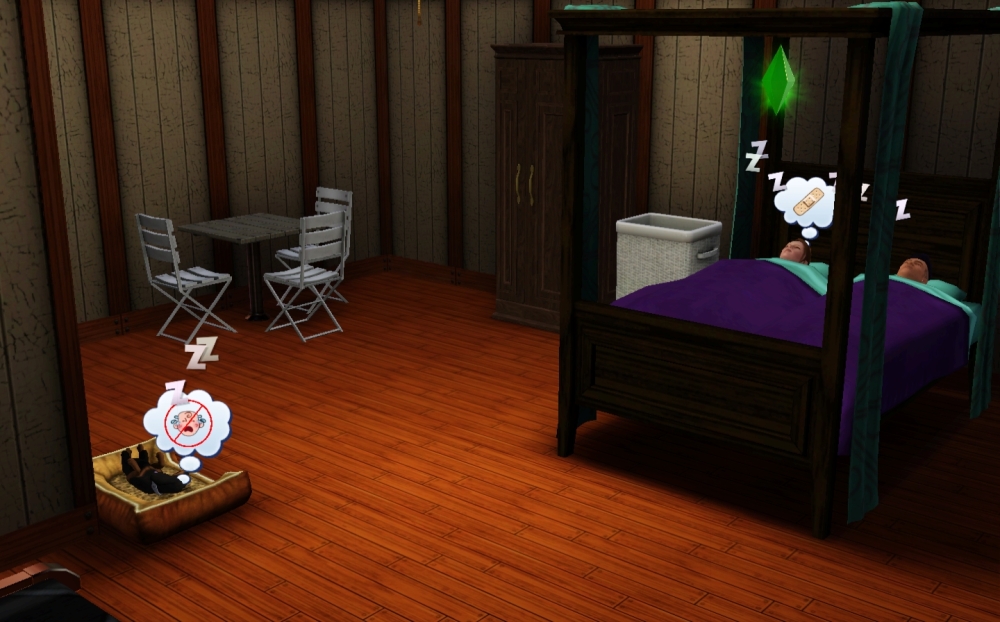 Across the main room, there’s a cheap table and chairs, a very nice fridge, and one of the most expensive beds in the game. Actually, it’s the cheapest bed with an energy rating of 10, which is what I was looking for. The higher the energy rating, the faster sims sleep, and I want these two to spend a minimal amount of time in bed!

There’s also a cramped little bathroom, but to be honest it’s just not that interesting.

Pip and Piper settle into cohabitation. Pip takes care of most of the chores, like laundry or brushing Marina, since Piper is rushing to get a decent start into her athletic career.

Pip doesn’t mind – they’re a team, this is just like watching out for each other on the field!

She spends most of her time working out, including jogging up and down the street to get a change of scenery. The wildlife around here is bonkers.

Piper makes a mental note to look up if deer can eat human flesh. This one is looking a little…hungry.

The power couple are so in-sync they even share the same dreams of Marina dragging them out of poverty.

Marina hasn’t dug up any pricey goodies lately, but she did get enough pieces to put together this dinosaur skeleton! She looks like she might be regretting that decision in this picture…

Since he has a functioning fridge to pull quick meals out of now, Pip doesn’t really need the apples he’s been keeping in his inventory. On a whim, I had him plant them, only for fall to immediately roll in and send all three seeds into dormancy.

Come on, game. It’s the desert! 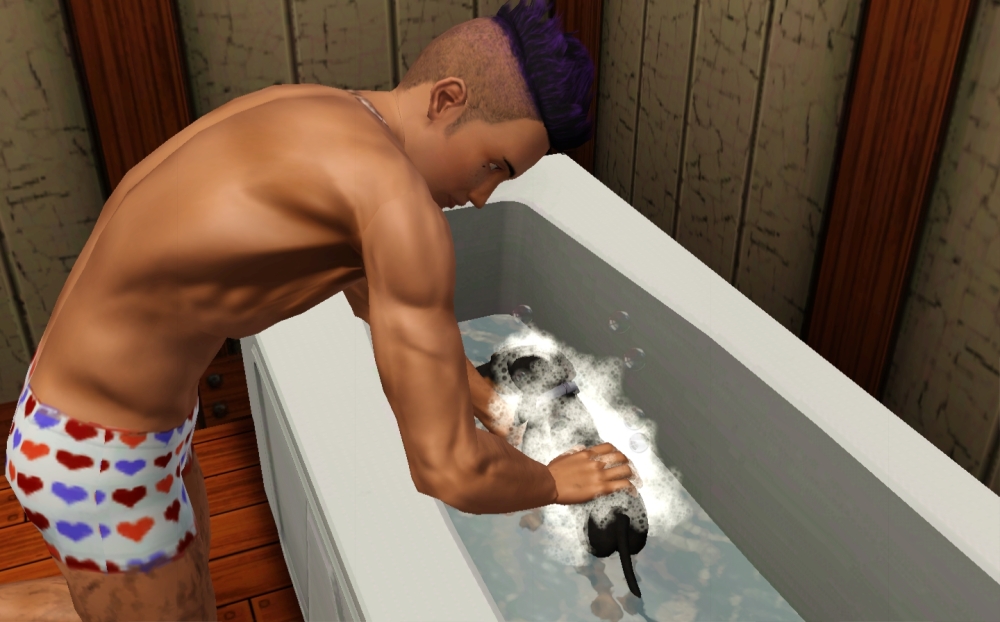 For Piper, arguably the best perk of moving in with Pip is that she gets an in-house trainer for her workout sessions. Pip is determined to make a star athlete out of her. Unfortunately, her clumsy trait keeps…well. You can see.

These dork-ass kids seem to have a mental link between getting hot and sweaty and getting hot and heavy – they celebrate Piper’s promotion to Toddler Sports Coach by taking their cardio workout to bed. 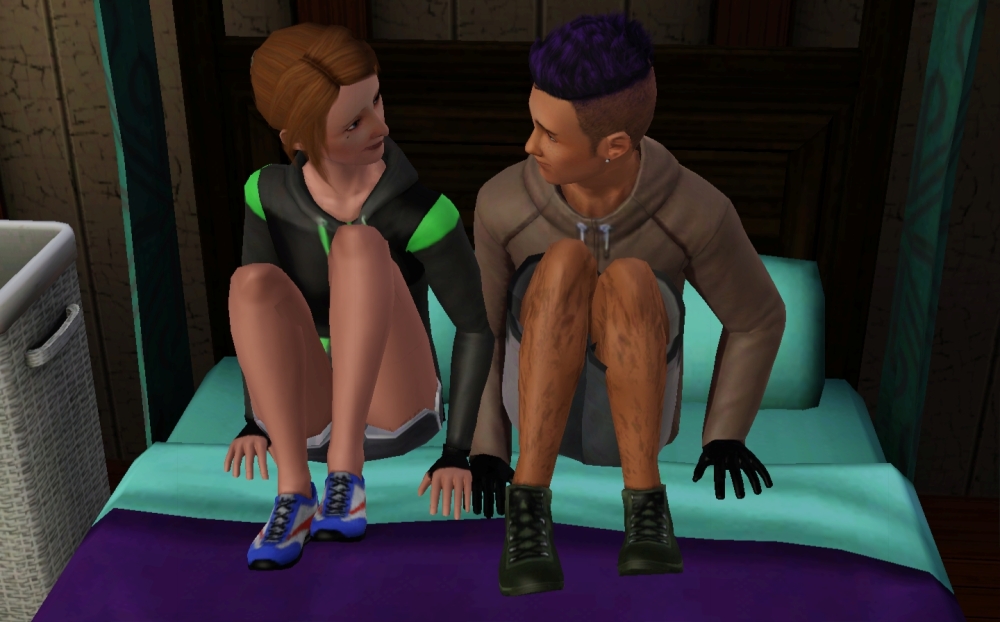 A familiar tune follows, and just to confirm it…

This legacy is on the move!

Piper has one of those faces that’s constantly making me crack up. She just…always looks on the verge of screaming and running away, I dunno.

These two have just been working out and working non-stop, which doesn’t make for great content, but at least progress is being made!

For those of you who may be curious, Piper’s full traits are Ambitious, Athletic, Artistic, Inappropriate, and Clumsy. Her LTW is, as mentioned last chapter, to be a superstar athlete, since I haven’t been able to change it yet. She also has a few levels in painting and cooking on top of her athletic skill.

Piper has an interesting family situation – obviously there’s the situation where her dad married someone practically her own age and she now has an infant brother, but also according to the sims wiki her mother is one of the ghosts in the Lucky Palms graveyard. But, even though they have the same hair and last name, the ghost isn’t linked to either Piper or her dad, Walter, on their family tree. Weird.

I hope you all have enjoyed reading as much as I enjoyed writing! Leave a like or a comment if you enjoyed, and let me know what you think I should do about Piper’s career/LTW. Thanks for reading!

P.S.: This chapter hasn’t been proofread, so if you see any typos or something that doesn’t make any sense lemme know!